It is not on the Level as the Toy Story Sequels Then Again Nothing is... 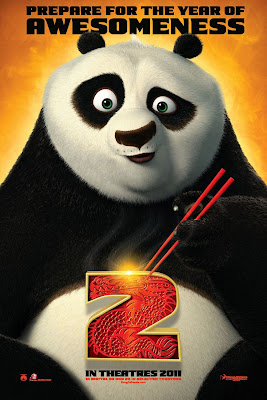 Kung Fu Panda 2
You know it is not summer without some sort of animated offering to the gods of adolescence. Mostly, I look forward to Pixar's releases because at the very least they will not demean the parents being dragged to see them. DreamWorks Animation though tends to be more miss than hit with me. The first Shrek was a great film that lost of its magic because of three horrible sequels... I cannot even watch it now. Madagascar was alright (Although Sacha Baron Cohen was hard to stomach) and Monsters Vs. Aliens was downright dreadful. With the exception of past films such as Antz, Chicken Run and the Wallace and Gromit feature, I tend to avoid DreamWorks Animation features (namely the computer animated ones) like the plague.

Yet, I was intrigued by the first Kung Fu Panda (still have not viewed it though) because of the opening sequence and the level of detail in the art direction department. Then How To Train Your Dragon was released and it kind of made me hopeful for the studio's future. Sequels can be tricky, you have to attempt to recapture the appeal of the original while not creating a carbon copy of it. From what I have read about the first (Yes, Yes I will watch it) and having seen the second, they appear to be different films from a story perspective.

However, the film tends to be very formulaic and it is a story that we have all seen before. Po (Jack Black) receives a flash about what happened to his family and is on a quest to find the truth of his origins (How he could be believe a goose was his father is beyond me). Standing the way of path is the evil Lord Shen (Gary Oldman who is wasted in this film) who threatens to destroy Kung Fu with a cannon (That will solve everything). Of course, it quickly becomes apparent that the murderer of the village of pandas including Po's parents was the same hater of Kung Fu (the dastard!). His motivation was a prophecy where he is defeated by a warrior of black and white (foreshadowing).

One cannot complain about the "look" of this film.
It is clear from once the plot gets underfoot where it is going to go, how it will happen and ultimately end (spoiler alert, trilogy). I suppose to counter this intuition, they overcompensated with art direction. All in all, Kung Fu Panda's use of non-computer generated animation was refreshing and look amazing much like its predecessor. The other drag of this film was that the voice cast did not seem too "into" being in the film. Overall, Kung Fu Panda 2 was a decent enough film that is better than many within DreamWorks computer generated catalogue.
Posted by Manfred "Manny" Funkowitz at 11:42 AM