The Simpsons is the Best Show Ever: #12 knows the the deadly secret behind tic tacs

The Simpsons is the greatest television show of our generation. Hands down no argument THIS IS FACT. I will fight this to the end. For any child of the 80s and 90s nothing reaches the cultural importance that The Simpsons has achieved. Aside from single handedly bringing respect back to animation in primetime it has proven to be the epitome of the modern American family more than any other show. It manages to be both topical and timeless with its tales of a a nuclear family dealing with dysfunction and the absurdity of modern life. Look a lot of my peers turn to Family Guy as "brilliant" and the show of our time. This is ridiculous. If you think Family Guy is funny that's fine, Macfarlane can definitely elicity some laughs but to say Family Guy is a better show than The Simpsons is just absurd. There is no way Family Guy has affected American culture the way The Simpsons has. Family Guy lacks the sincerity and heart that The Simpsons infuses in each episode along with its surreal adventures. Nonsequiturs are funny, but they do not make a brilliant show. Anyone can throw randomness at a screen and get something to hit. The Simpsons has developed characters that are so much more than "stupid father" or "awkward daughter." We have seen these characters for over twenty years and they have gone through heartache, joy, dealt with the loss of family members and loved ones, been reunited with long lost siblings, achieved lifelong dreams, and even journeyed into space as well as a brief journey into reality(thank you Hom3r)

This is my favorite show of all time. I still watch it every sunday, sure it may not be as good as it used to be BUT the past few seasons have been pretty great, most likely due to David Mirkin taking a stronger producer role lately(see seasons 5-6 for examples of Mirkin rocking it out as showrunner). As part of our new Idiot Box section I am going to be discussing various Simpsons episodes from the past twenty years. My blog brothers should be contributing as well. We here at PORTEmaus are dedicated to bringing you the best content around and when I think of sharing my passion with you all, few things rise as close as my love for The Simpsons. I'm sure my colleagues here feel the same. Feel free to comment and discuss your favorite episode. Believe there ARE plenty out there.

The first episode I am going to discus is Season 12 episode 6 "The Computer Wore Menace Shoes." In thinking of beginning this article I can't think of a better way to begin than with the episode where Homer starts a blog, runs out of content so he begins making stuff up and ends up being kidnapped and taken to the island from the show The Prisoner. This episode was written by the elusive John Swartzwelder and directed by Mark Kirkland.

Chalkboard - I will only provide a urine sample when asked.....kind of a meh chalkboard bit

Couch Gag - Santa's Little Helper doing the snoopy dance, the family walks in and looks confused....pretty funny...always cool to see someone doing the snoopy dance...there's another bit somewhere in the Simpsons universe where Milhouse plays the piano like Linus and everyone dances Peanuts style.

This episode first aired in December of 2000. Its crazy to see the depiction of the internet 11 years later. While its portrayal of people constantly regurgitating the same information over and over online is still apt, the after dark toasters floating in the background are all but extinct. After Homer does not get an email about the plant being closed, he decides its time to get a computer. He quickly creates a website which does not immediately get hits. I love how obsessed he is with his hit counter. Definitely something I can relate to. The picture of him on the couch lit only by his computer screen as Lisa begs him to go to bed is hilarious and all too close to home. Soon he realizes he can get hits online by posting about sleazy news. Again its amazing how topical this still is. Two of the most successful blogs are TMZ and PerezHilton which both specialize in celebrity gossip(but I'm sure you knew that). Like all episodes there are plenty of intelligent asides from which to talk about, like Kent Brockmans rant about real news being told by real reporters and not online bloggers(like I said...best show of our generation). The show really kicks it into high gear when it enters its third act and becomes a parody of the island from The Prisoner. Homer runs out of stories so he begins to create his own news and in his acts of yellow journalism irresponsibility catches the eye of the island and gets kidnapped for stumbling upon the truth about flu shots. 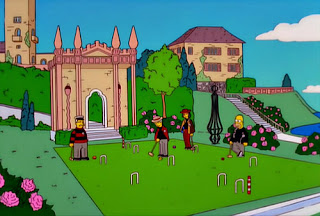 The Prisoner was a show starring Patrick McGoohan(who guests in this episode as #6) about an ex spy taken to the island for "something" he knows. The island on the show fully captures the "far out" 70's vibe that the original show had from the Flamingo with the bowler hat to the room in which number two interrogates Homer. There's even a quick joke about the number system in which Homer discovers he's number five and laughs at number six. I could go on and on, but perhaps my favorite joke about The Prisoner comes when Homer steals the boat from number six(which could have held both of them apparently) and security sends a bubble after him. In the original show the bubble was a security drone that was sent after anyone who dared to escape. Here in an amazing bit of logical deduction Homer pops the bubble with a fork resulting in the amazing exchange of "Why did you think a bubble would stop him?" "Shut up...THATS WHY!" 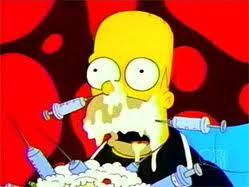 Definitely one of my favorite episodes and one that serves as a perfect jumping off point, what with its commentary on the internet as both an addictive and unreliable means of news, for this ongoing retrospective of The Simpsons. We hear at PORTEmaus have been enjoying some mild success in the past month, and its all due to you out there. So please keep reading, tell your friends and like I said feel free to comment down below I'd love to hear what YOU'RE favorite episodes are. I'll keep doing these articles for awhile...again there is plenty of material to choose from. So hopefully I won't run out of things to write about and end up on the island being gassed every two minutes.

One last thought - The German stand in for Homer while he was on the island was awesome "I am a new tie wearing" should be said by everyone at least once a day.
Posted by Bence at 10:54 PM