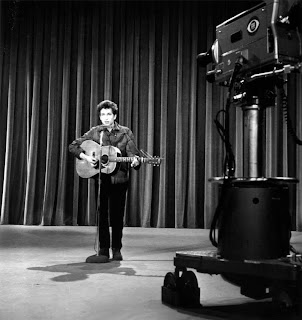 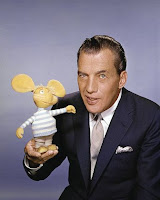 Remember the Ed Sullivan? Of course you probably don’t, it’s quarter-century plus years on the air ended in 1971, but you’ve certainly heard of it, at least you have if you’re a fan of music from the 50’s or 60’s. The Sullivan show was known for making musical groups, not breaking them, just ask Elvis Presley or the Beatles (you “Back to the Future” fans should seek out a little known 70’s film on the subject, “I wanna Hold Your Hand,” made by the same director and writers). Remember Bob Dylan’s performance in 1963? It happened 48 years ago just this past week. It occurred just a few weeks short of the release of his now legendary “Freewheelin’ Bob Dylan” sophmore LP,remember? You probably wouldn’t, because it never happened, at least not past the rehearsal stage. 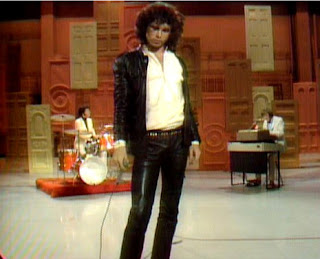 While Ed Sullivan’s show made a bunch of artists, it seems it was more fun to go against being told what to do, which he and his producers often did in this era of rock n’ roll censorship. Buddy Holly (“Well Ed, I hope they’re (his band the Crickets) more excited about doing this damn show than I am”) and Bo Didley (“no black boy crosses me!”) were the first to create controversy backstage with the powers that be. Most of these moments get left in the dust for the Doors. The Doors lead singer, Jim Morrison, decided against the proposed lyric change for “Light my Fire,” and sang the original lyric that mentioned not being able to “get much higher.” Though, unlike how the moment was portrayed in Oliver Stone’s rather dimwitted film, “The Doors,” Morrison did not go right up to the camera and chicken cluck his way into the lens as he sang the original line, he simply sang it.

There were many other controversies to come through the Ed Sullivan Show’s doors. The bad-boy Rolling Stones gave in and changed a lyric to “let’s spend some time together,” when they performed their hit sing “Let’s Spend the Night Together” on the show in 1967. The Stones did try to perform their second song in Nazi uniforms, jokingly protesting the fascist nature of what Sullivan allowed to promote, but Sullivan had none of it. Instead of changing back, the Stones left, already having done the damage of giving into his request.

It’s Dylan’s that I find the most interesting though. Because he was unknown at the time, the Sullivan show was his first true big chance at getting his name out there as a PERFORMER, his national-TV debut on a show that was part of the American way of life at the time. He was quickly getting known among artists in the folk music community as a writer thanks to the many covers of “Blowin’ in the Wind” that were already popping up, but it was still a question of if he’d make it simply as a songwriter or also as a performer. He had no hit song on the radio at the time ala The Doors or The Rolling Stones or Buddy Holly for that matter. This was just on the cusp of his would-be revolutionary “Freewheelin’” album and was his chance to get America to see him, he NEEDED the exposure. But, instead of being willing to compromise, he simply said… “No Thanks.”

Now Eisenhower, he’s a Russian spy
Lincoln, Jefferson and that Roosevelt guy
To my knowledge there’s just one man
That’s really a true American: George Lincoln Rockwell
I know for a fact he hates Commies cus he picketed the movie Exodus

Yes, Contrary to rumor, Dylan didn’t throw a fit at Sullivan and his producers before leaving. This is somewhat surprising to those who know the Dylan of the era, in a rather famous scene in “Don’t Look Back,” he berated a reporter for Time Magazine during an interview: “I don’t need Time Magazine…I’ve never been in Time Magazine and I’ve filled this hall twice…” It wasn’t the case here though. When a producer for the show told Dylan he couldn’t sing his John Birch Society/Red (Communist) scare song “Talkin’ John Birch Parnoid Blues” and if he would rather sing something else, he said “No, this is what I want to do. If I can’t play my song, I’d rather not appear on the show.” That was it, and he calmly left. The damage was done though, it immediately sent forward Dylan’s reputation as a rebel (with a cause) and as an artist who did what he wanted, and wasn’t willing to compromise on it. When multiple papers ran stories on it (including the New York Times, Time and Playboy) Sullivan himself came out and denounced the “networks” decision in interviews where the subject was brought up. 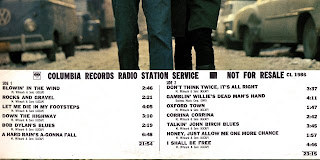 The original track-listing and sequence for Dylan's legendary second LP

The “Talkin’ John Birch Paranoid Blues” wasn’t in done helping shape Dylan’s career though, as his own record company, Columbia, decided it shouldn’t appear on his upcoming second record, “Freewheelin’ Bob Dylan.” When told of this Dylan DID throw a bit of a fit, going right to Columbia’s then-lawyer, this is when record companies didn’t have entire floors of their buildings dedicated to their lawyers, Clive Davis (yes, that Clive Davis, who would later run Columbia for a short time and appear often on ‘American Idol’). Davis talks of a scene in his autobiography where Dylan came bursting in angrily demanding “What is this sh*t? Who are you to tell me I can’t come out with this song?”

The animosity didn’t last, as Dylan himself appeared in court on Davis’ behalf years later in 1975, and even then in 1963 it gave Dylan a chance to re-think his upcoming LP. Dylan decided that he needed to branch it out more, saying himself that “there’s too many old-fashioned songs one there, tryin’ to write like Woody (Guthrie).” Dylan went in and recorded a number of new songs: “Girl from the North Country,” “Masters of War” and maybe his finest "talkin' blues"/funny protest song: the direct replacement for “John Birch” entitled “Talkin World War III Blues.” Ultimately Dylan had plenty to work with, as the released record itself is 14 songs long, and yet on the 1991 “Rare & Unreleased” bootleg series release, no less than 9 of the songs on the first disc (including a live take of “Talkin’ John Birch” where he opens up with “there ain’t nothin’ wrong with this song”) are outtakes from the “Freewheelin’” album, and there was a slew more in the vaults too, including a cover of Robert Johnson, for those who paid attention to a recent article of mine. In fact, there's a legitimate bootleg release of the "Freewheelin'" sessions on the black market that takes up four discs...

It was just weeks away from release and Columbia re-printed the LP and the cover with the new sequence of songs (see a VERY RARE, original look of the album's original sequence up above) Dylan and his management decided on, and it still remains a controversy on whether "John Birch" getting kicked off happened shortly before the Ed Sullivan “appearance” or was directly attributed to that controversy. Whichever, “Talkin’ John Birch” led to Dylan not only pushing back his national-TV debut, but changing drastically what is perhaps the greatest sophmore record release of any artist in history. That is how Dylan walking off the set of the “Ed Sullivan Show” did more for his career than simply changing a lyric or song-choice and going through with the very public performance ever would have.

I think the main reason I did this article, besides the “this week in rock n’ roll” sort of thing it is, is to remember a time when an artist could be controversial in what they were trying to say, when controversy meant SOMETHING. Controversy in music is so much better (for me) when it doesn’t involve how weird or few layers of clothes you have on are. Hawk naps.

Well, I fin’ly started thinkin’ straight
When I run outa things to investigate
Couldn’t imagine doin’ anything else
So now I’m sittin’ home investigatin’ myself!
Posted by Hudson Hawk at 9:33 PM