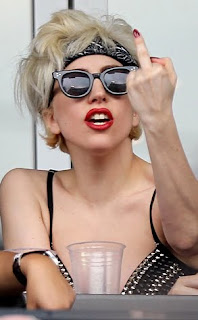 Beautiful Melodies telling you Terrible Things: New Tune Tuesday 5.24.11
I hope you all enjoyed Bence’s take on this weeks releases on Blu and DVD, Tuesday really is the best day of the week, well, usually…

It’s time to for all to seek out some fresh ear bud, well, maybe. Lady Gaga’s new album, “Born this Way,” reminds me of an old Mark Twain quote in a way, because I find the release both original and good. The problem is the original parts aren’t that good and the good parts aren’t really original. So this leaves me in a bit of a dilemma this week, for when I do ‘New Tune Tuesday’ I like to be mostly positive about some major or major underground releases. For instance, last week, I tried to showcase the positives of Moby’s new release for people who may dig his stuff, even though it may be hit or miss with me. I have a hard time being positive about Dada’s release (Dada art movement pun fully intended) when I find it poor on a number of levels, from writing and production on up (or down?). I really think if you like her previous work even, if you’re honest with yourself, you know it’s pretty much a sophomore stinker. Other major releases this week? Not Another Teen Movie, er, not another Glee cover compilation (same difference really) and Brad Paisley’s ‘This is Country Music.’ My problem there? 99.9% of major label country artists are so far away what is TRULY country music, at least what should be, it’s not even funny. Maybe he had called it ‘Failed Pop Star with a Banjo’ I would have showcased it.

So for this week, I decided to dig a little deeper for a couple releases, including my release of the week… 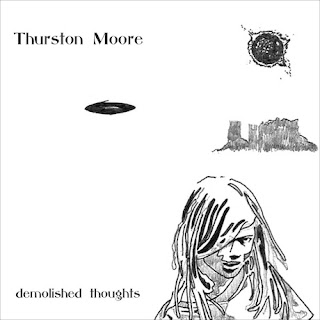 Hey it used to be so easy baby,
Just to find you in the clear,
But the streets have ghosts
That call you back before you get to near,
The days so dead it never ends,
You whisper baby, “Please do it again,”
Now it’s an echo without a friend,
You lost your lover…

History Class: If the name Thurston Moore doesn’t ring a bell, which it might, considering Rolling Stone named him in the top 35 of their 100 Greatest Guitarists list, the name Sonic Youth might, it’s the name of his band. To call Sonic Youth influential would be a bit of an understatement. They started out as sort of avant-garde noise enthusiasts in the No-Wave (a pun on New Wave obviously) movement in the early 80’s. Along the way to becoming pioneers in the ‘noise punk’ genre, and as often as they found themselves being innovative or influential, fans would also find them inconsistent at times or even frustrating, which, those things sort of go hand in hand with each other. While I wouldn’t recommend their strange Madonna covers project to anyone, some fans of other genres might now or want tos eek out their collaboration with Chuck D of early rap pioneer Public Enemy. If you want my opinion on what Youth albums to buy, you might take a look at their indie trilogy before their big label days: ‘Evol,’ ‘Sister’ and ‘Daydream Nation.’ Oh, just a side-note, Nirvana was heavily influenced by Sonic Youth, and a big moment came for them in 1990, when signed to the indie label Sub Pop, they were given a chance to open a small tour for SY (by this time on the David Geffen DGC label) just when people were starting to take notice of the Seattle grunge scene after Rupert Everett highlighted it in an issue of Melody Maker. The band made an impact on Kim Gordon of SY, who talked David Geffen into taking a serious look at them. He did, while he didn’t offer them millions up front like some big labels who were taking notice, he offered them something more: creative control of their music. Sonic Youth would stay with DGC for many years, however their latest offering, 2009’s ‘The Eternal’ came on an indie label.

The Album: All that talking about about Sonic Youth is rather pointless when you find that ‘Demolished Thoughts,’ the third solo album from Thurston, really has little to do, sonically speaking (sonic pun fully intended) with his band. Here we find an acoustic rock album produced by none other than Beck and featuring harp and violin amongst it’s mix of instruments, that finds itself with some melodies that can be beautiful, haunting, sad and oftentimes, all at the same time. Those looking for a lot of noise and feedback or a raucous time of Beck and Thurston jamming out, this is not for you, look elsewhere. Those interested in an artist trying something different, letting folk music inspire him in a way it never has before, while he still finds his penchant for doing interesting things sonically (pun still intended), will find something here. From the reminiscent “Orchard Street” to, as Thurston put it, “lyrics of salvation through lonesome meditation of nature” in “Illuminine,” to “In Silver Rain with a Paper Key,” a song backed at it’s core by it’s brooding instruments, about strangers falling in love and disappearing just as quickly as they came into contact each other, the album grabs you without being overbearing. Since this is coming from a guy from Sonic Youth, that seems almost a contradiction, but it’s not.

Available on: CD, Vinyl, MP3. Also note: The iTunes release has a bonus track, a cover of Woody Guthrie’s “This Train is Bound for Glory.” Which, in honesty, doesn’t seem as interesting as the rest of the LP.

Other Notable Releases this week (5/24): 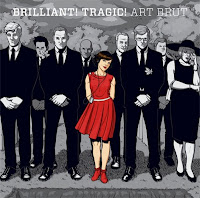 Art Brut - ‘Brilliant! Tragic!
It must feel pretty good to ask Frank Black of the Pixies to produce your album and he not only says “yes,” but he does it again the second time you ask. Here the British/German hybrid indie rockers find themselves not only releasing a comic book of the same name at the same time, but also trying to stretch out their material into new directions while simultaneously trying to stay true to their more punk roots. Does it work? At certain times better than others, but overall, fans of theirs will certainly accept this new material positively. With that being said, I can’t really fully get behind an album which features a song titled “Axl Rose”…
Available on: CD, MP3

‘Icon’ series – various artists
I give credit to the ‘Icon’ series, like Sony/Legacy’s ‘Essential’ series it gives people to dip into a “best of” type album for an artist for a modest amount of money (‘Icon’s’ are usually in the $6-9 range at Best Buy) and get to know or re-discover a solid band. For instance, it seems week in and week out you can walk in (to Best Buy) and pick up the 12-song “Nirvana: Icon” for like $6, if you don’t have any of that band, that’s tough to complain about. This week Muddy Waters, A&R Records Era Gin Blossoms, Hank Williams (SR), Mama’s & The Papa’s, Willie Nelson and a few others get released. I’ll be honest, If you don’t have any Muddy Waters, Blossoms or Hank in your musical arsenal, go pick them up. If not, it’s your ears loss…
Available on: CD

In other Media: As I said at the beginning, hopefully you've checked out Bence's look at the week in movie home releases, if not, do so now. He mentioned the digibook blu of 'Gettysburg,' which I do recommend. Also though, the prequel to that film, 2003's 'God's & Generals' was released in a directors cut digibook that is worth it for a couple reasons: the painstaking detail to the Civil War events and period, the DC is lengthy but FAR better than the original theatrical and it also features both over the end credits and as a music video bonus feature, a shortened version (the original being over 8 minutes long) of Bob Dylan's "'Cross the Green Mountain," one of the bards best and one of the best songs in general at capturing the horror and imagery of a soldiers viewpoint of the brothers fighting brothers American Civil War. "Alters are burning/ the flames far and wide/ the foe has crossed over from the other side/ They tip their caps from the top of the hill/ You can feel them come/ All brave blood do spill..."