Bence here with a look at some of the films that were released on DVD/Blu-Ray this week. Hopefully I can keep up with this and I'm going to try and get the information to you before they drop on Tuesday. I will only be looking at a few movies a week, for instance this week there's really only two that I'm recommending you pick up. Don't worry these will never be as long as my immensely popular Movie Night posts...which for those interested I have some really exciting one's coming up and one more director's focus that will be my follow up to RIchard Kelly.

These are recommendations coming from my own desire to see them for whatever reason. This week I actually have not seen either of the choices, but I'm pretty sure both of these are solid winners. 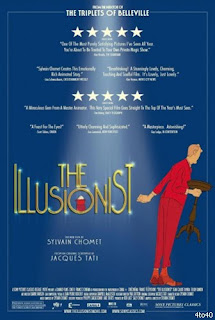 Nominated for Best Animated Feature this year at the Oscars it lost out to the brilliant Toy Story 3. Like I said I haven't seen this yet, but if I knew nothing of the project the simple fact that this is Chomet's follow up to Triplets of Belleville is reason enough for me to pick this up. Chomet is one of the few people working in traditional animation and still pushing the boundaries of what you can do with it. His films are VERY sparse in dialogue I think there might have been 5 words spoken in Triplets, but each scene is PACKED with emotion. His animation comes to life beautifully on screen and he is able to tell you a story through moving images the way film was intended. A true master of his craft I really hope he continues to work in traditional animation so that we still have something to show the next generation besides computer generated cartoons.

Now I said if I knew nothing of the project I'd still pick it up for his reputation alone. Well being the film nerd I am I happen to know a bit about the film. It tells the story of an aging illusionist who's career begins to become more obsolete with the rising popular of rock stars. He meets a young fan along his travels and I imagine their lives are changed forever. That story alone and how it parallels what's happening in animation again would be enough to grab me in, but that's not all. The film itself is based on a script from French comedic master Jacques Tati. Jacques Tati was a master comic filmmaker who directed Mr Hulot's Holiday and Mon Oncle among others. So now we have a film based on a script from one of the masters of French cinema, it deals with magicians and has a great allegorical story, and it's being directed by Sylvain Chomet. Needless to say as soon as I finish typing this up as long as it's ok with Mr. Funkowitz I will be jumping on the subway to the nearest "enter name here" to pick this up. 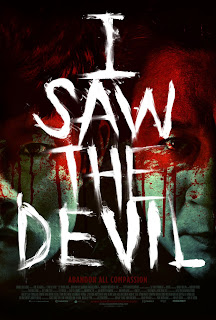 I Saw the Devil - Kim Jee-Won

This is Kim Jee-Won's latest film since since The Good The Bad and The Weird, and I'm sure all you fans out there remember that The Good The Bad and The Weird made my top ten for 2010. It should be no surprised that I am ecstatic to get a chance to see his newest film so soon. This director is exciting, he came out with A Tale of Two Sisters an atmospheric horror story that moves at a deliberate pace while putting a spin on the standard haunted house ghost story. Then he makes the craziest post modern attempt an epic spaghetti western I've ever seen. Now his latest is a revenge story involving a secret agent chasing after the man who murdered his pregnant wife, and I'm guessing the closer we get to the end the more blurred the lines are between good and evil. Kim Jee-Won is a master at setting tone, whether its the insanely kinetic vibe of his western or the haunting poetry of the country house in his horror movie, I'm sure this film will blow me away from beginning to end.

I mentioned that this is a revenge film, well sure enough it stars Choi Min-Sik as the killer. You might remember him from Korea's other powerhouse film maker Chan Wook-Park's masterpiece Oldboy. Also he's reuniting with Lee Byung-Hun who dripped cool as "the bad" in The Good The Bad and the Weird. Here, Lee Byung-Hun gets a chance to play the opposite side as the secret agent chasing after his wife's murderer.

I've seen other lists where they give you twenty or so titles to choose from, but man I don't have the time for that. Manfred keeps us all on a short leash, plus I feel confident that everyone will be pleased with these two titles. Hope you enjoy them I'll be back next week where it looks like Criterion will be dominating the releases. 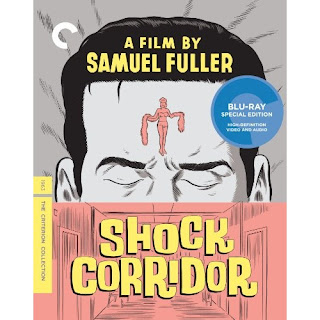 One last thought - speaking of Criterion, my good friend Hawk reminded me that Shock Corridor was released on Blu Ray not too long ago. Sam Fullers movie is a tale of a journalist going into an insane asylum for a story and well I'm sure you can probably guess where the story goes from there. Fuller was a master craftsman and Shock Corridor is no exception, it would make a great companion piece to One Flew Over the Cuckoo's Nest.
Posted by Bence at 10:56 AM